"Nobody rises to low expectations."
- Calvin Lloyd
I find that I treat this issue very differently in my professional versus my personal life.
At work, we set high expectations, because if you strive for mediocrity, that is exactly what you will get.
In my personal relationships, excluding my wife and her immediate family, I have learned not have any expectations, that way, it is hard to be disappointed or hurt.  It has served my well over many years, and I do not see it changing anytime soon.
Posted by Ken Riches at 2:51 AM 6 comments:

Email ThisBlogThis!Share to TwitterShare to FacebookShare to Pinterest
Labels: Mediocrity With thousands of Emperor penguins(Aptenodytes forsteri) huddled close together for warmth on the ice sheets of Antarctica, there seems bound to be some competition for a toasty spot near the middle. But these enormous clusters manage to bring each penguin in for a chance to warm up—all without causing a dangerous crush. How do they do it?

A team of researchers positioned a high-resolution, time-lapse camera to capture the surprisingly subtle and complex movement dynamics of one penguin pack near the Neumayer Antarctic Research Station. An analysis of the video revealed the coordinated movements that were invisible to the human eye in real time.

In the sped-up video, they could see that the "Emperor penguins move collectively in a highly coordinated manner to ensure mobility while at the same time keeping the buddle packed," the researchers noted in a new study, which published online Wednesday in PLoS ONE. "Every 30-60 seconds, all penguins made small steps that travel as a wave through the entire huddle. Over time these small movements lead to large-scale reorganization of the huddle." And the reshuffle takes time, with each stepmeasuring just five to 10 centimeters.

The wave pattern was not unlike that of a a sound wave traveling through a fluid, pointed out the research team, which was led in part by Daniel Zitterbart, of the Department of Physics at the University of Erlangen-Nuremberg in Germany. "In general, individual penguins do not change their position relative to their neighbors, and they do not force their way in or out of a huddle," they noted.

In dense crowds, people also tend to move in waves. But we are not so orderly, which often leads to chaotic crushes and occasionally death. "Why these waves are uncoordinated, turbulent and dangerous in a human crowd but not in a penguin huddle remains an open question," Zitterbart and his and colleagues wrote. Another lingering unknown is whether the evenly paced penguin waves are the work of a few leaders, like enthusiastic fans at a baseball game, or whether each penguin "follows a well-defined hierarchy among group members, similar to the collective behavior in pigeon flocks."

But however the wave gets going, it seems to do the trick. Most of the penguins featured in the film were carrying an egg and were in the midst of fasting—all the while facing temperatures of -33 to -43 degrees Celsius with howling August winds of 8.3 meters per second.


Plant Status
• Japanese media are reporting on a joint assessment by Tokyo Electric Power Co. and the government that the company has met the first step in its effort to stabilize the reactors at the Fukushima Daiichi site. Among the targets met in the first step include re-establishing stable cooling capacity for reactors 1-3 and the used fuel storage pools for reactors 1-4. The company says it did this by putting recirculating cooling water systems into operation. A key indicator of success, TEPCO says, is that temperatures at the bottom of the reactor pressure vessels have decreased and are now stable. TEPCO also says it has reduced the level of radioactive releases from the plant to one-2 millionth of the peak release recorded just after the March accident.
• Typhoon Ma-on has caused water levels to rise in the basements of the reactor buildings at Fukushima Daiichi. On Thursday water in the basement of reactor 1 rose by 24 inches from the previous day, but there is no danger of water overflowing from the basements.

Industry/Regulatory/Political Issues
• A public U.S. Nuclear Regulatory Commission meeting to discuss the agency’s near-term task force recommendations for safety enhancements at U.S. nuclear energy facilities is scheduled for July 28.
• Kansai Electric Power Co. has shut down two of its reactors in Fukui prefecture, one at the Takahama plant and another at Ohi. The plants were due for regular inspections, but will not restart until they have completed government-ordered “stress” tests. The schedule for the tests has not yet been determined. The shutdowns bring the number of operating nuclear reactors in Japan to 17 out of 54.
• Two Japanese supermarket operators are recalling more than 5,900 pounds of beef from Fukushima prefecture cattle that were fed rice straw possibly contaminated with radioactive cesium. The Japanese government is considering buying all contaminated beef. Earlier in the week, the government suspended shipments of beef cattle from the prefecture.

Media Highlights
• A report by Nasdaq/Dow Jones Newswires says Japan’s Nuclear and Industrial Safety Agency could order the country’s nuclear utilities to begin the two-stage European-style “stress tests” on shutdown reactors as early as this week. The results of the tests will inform decisions to restart the reactors.
• Asia-Pacific News says that IAEA Director General Yukiya Amano will make a first visit to the Fukushima Daiichi site Monday, July 25. Amano is scheduled to meet with Japanese Prime Minister Naoto Kan and with government ministers and TEPCO executives.

New Products
• A report by Bisconti Research Inc. on its June public opinion survey of communities near U.S. nuclear plants can be found on NEI’s member website.
• Topline results of a July nationwide survey by Luntz Global of U.S. public and opinion leaders on post-Fukushima attitudes is available on the NEI member website. Luntz’s presentation on communicating nuclear issues is also available. Below is a summary of the program, followed by an outstanding 8-minute look at all 135 missions.  It brought tears to my eyes.  Well Done NASA.  (Source)


Now that Atlantis has safely returned to Earth and the 30-year space shuttle program has drawn to a close, it's time to look back at the reign of Discovery, Atlantis, Endeavour and the tragically shortened careers of Challenger andColumbia. Since 1981 NASA has launched 135 shuttle missions, reaching destinations such as the Mir space station, the Hubble Space Telescope and the International Space Station.

In those three decades the shuttle has had its triumphs—fixing the initially flawed Hubble, for one—and its tragedies. Below is a video tribute to the space shuttle, prepared by our colleagues at Nature, which touches on all those highs and lows. (Scientific American is part of Nature Publishing Group.) The tribute features footage from every shuttle flight, including the STS 135 mission that concluded this morning, and features a good number of the 355 individuals who flew on the shuttles.


Wish this lesson is one that our representatives in Washington took to heart.
Posted by Ken Riches at 6:06 PM 7 comments: 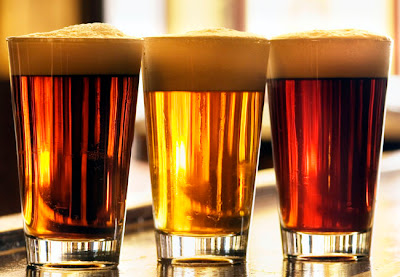 Today is going to be dedicated to chores around the yard, and perhaps a cool amber beverage(s).

Speaking of cool amber beverages, Travel & Liesure has come out with their top 20 voted cities for craft brews.  The top ten are: Portland (OR), Denver, Seattle, Providence, Portland (ME), Savannah, Boston, Austin, San Francisco, and Nashville.  Click here to see the other ten :o)
Posted by Ken Riches at 11:15 AM 5 comments:

Email ThisBlogThis!Share to TwitterShare to FacebookShare to Pinterest
Labels: Beer, Travel and Liesure

The Model 367 BiPod is a dual-fuselage, hybrid electric car-plane, which engineers at Scaled took from a preliminary design to first flight in just four months. It made its maiden trip March 30, just before Rutan’s official retirement. The company says it has made several short jaunts off the runway at Mojave, Calif., building up enough speed with the drive train to take off without propellers, which have not been installed yet.
The roadable aircraft, which in typical Rutan fashion looks bizarre and awesome, will have two 450cc engines, one for each twin fuselage. The driver/pilot will get in the left-hand cockpit to drive, and get in the right-hand cockpit to fly, Aviation Week explains.
On the roadways, the engines will power two driving wheels on each fuselage; in the air, the engines will drive four 15kW propellers, one on each wing and one on each tail. Lithium batteries in each nose will provide an added boost for takeoff and will recharge in flight.
In car mode, it can go 820 miles on tank of gas and 35 miles on batteries alone.
Source
Posted by Ken Riches at 1:02 AM 3 comments:

Burning garbage to make energy--on its face, anyhow--seems like a win-win proposition, but the chemical arithmetic has never really added up to a winning proposition. Nonetheless, a major energy supplier and a big time trash hauler are both finding value in Montreal-based Enerkem. Today the company announced that oil refiner Valero and sanitation giant Waste Management are pumping a combined $60 million into the company, whose technology turns old utility poles and household garbage into ethanol.


The technology itself is fairly straightforward: a plant receives municipal solid waste, which entails pretty much anything that goes out with the household garbage. Recyclables are separated out, the waste is shredded and heated to about 750 degrees. Hydrogen and carbon monoxide are trapped as they escape the incinerating rubbish and impurities like carbon dioxide are filtered out. The pure gases are then run over a catalyst, which converts them to methanol. A further refining step turns the methanol to ethanol or other feedstocks.

By consuming garbage, no potential food resources are sacrificed to make fuel. The trash doesn’t end up in a landfill, where it would slowly decompose and give off methane, a greenhouse gas. And, you know, it’s trash. If we were using it for anything else, it wouldn’t be there.
Enerkem is currently building a second refinery in Edmonton, Alberta, that could produce up to 10 million gallons of ethanol per year, and a twin plant is slated to open in Tupelo, Miss., thanks to a $50 million DOE grant. Each would devour 100,000 tons of garbage annually. If it can get the model off the ground and working cost-effectively, it could be a paradigm-shifter for both energy production and waste management. Four-dollar gasoline and a $60 million cash infusion won’t hurt.

Source
Posted by Ken Riches at 3:13 AM 3 comments:

Crisis - Appropriate for our debt limit!

"When written in Chinese, the word "crisis" is composed of two characters. One represents danger, and the other represents opportunity."

The Eightfold Path illustrates the moral principles in which all Buddhists should practice. It goes into detail about the basis of all Buddhist teachings: morality, meditation, and wisdom. This is the eightfold path:
Following the Noble Eightfold Path helps a person realize that greed and selfishness cause all earthly suffering. With this new understanding, one’s suffering may end.

I love investigating new ways of thinking, there is always a nugget of wisdom to be gained.

Click Here to learn more.
Posted by Ken Riches at 3:06 AM 8 comments:

"I don't know the key to success, but the key to failure is trying to please everybody."
- Bill Cosby
Posted by Ken Riches at 2:52 AM 5 comments: Today, we are outbound for our annual Vegecation to New Smyrna Beach, Florida.

We have a timeshare there that we have been going to for 10 years.

Looking forward to some downtime.

Will try and post if there is anything interesting, but expect commenting and such to be limited.
Posted by Ken Riches at 6:54 AM 11 comments:

Take a PM Journey With Me

Click the Picture if you want a laugh. Send me an e-mail if you want to be a contributor.